I have had a lot of requests, messages and questions about laundry detergent over the past year and I have been holding off because I 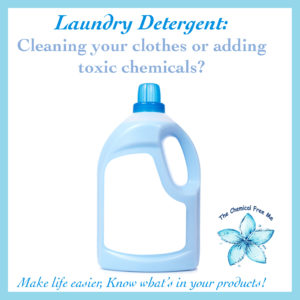 hadn’t found the perfect solution myself despite years of trying. Since I have tried so many things I want to break this down over the next few weeks so information doesn’t get lost. This week’s focus: toxins likely in your store bought detergent.

Diethanolamine: This can be linked to tumors in kidneys and the liver. It has links to developmental toxicity and is considered an eye and skin irritant. EWG scores it as a 10 (the most toxic ranking) http://www.ewg.org/skindeep/search.php?query=Diethanolamine&h=Search

Quaternium-15: Added to help a product clean better. Another known carcinogen that releases formaldehyde. (Scores an 8 out of 10 according to EWG)

Linear alkyl sodium sulfonates (LAS): Toxic to aquatic life and may be a skin and eye irritant.

Petroleum distillates(also called naphthas): This ingredient can be linked to cancer and lung damage.

Fragrances: We have covered this a lot in the past. A “Fragrance” covered by trade secret may include any number of over a thousand different chemicals. Some have never been tested for safety and others are known carcinogens.

Polyalkylene oxide or ethylene oxide: One or both may be added to help “stabilize” the product. Both are linked to respiratory issues, kidney and liver damage.

I once used the “Think Dirty” app to scan almost an entire isle at Target. Some that I assumed were going to come out on the better end-did NOT. It was actually shocking and I left without detergent. I was determined to find a safer detergent. Next week we will explore some other options I tried and what the downfalls were.

*Please note: This list does NOT include toxins in dryer sheets since that was covered in a previous post) 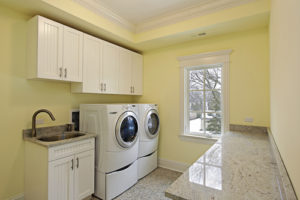