When you picture summer images in your head you often picture a child drinking water spraying from a garden hose in that “relaxed, freedoms of summer” images we think of.  Is this ever a good idea? 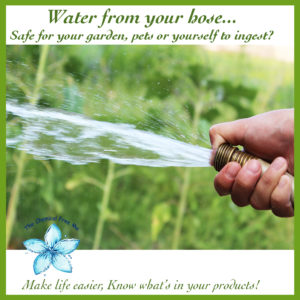 Personally we don’t drink the tap water due to the fluoride and drug residue contents they all have. However, are there extra risks if it is coming from the hose? There are.

Aside from the obvious bacteria concept of older hoses there are issues with brand new hoses and drinking water.  When tested all hoses contained phthalates.  Which are chemicals that are added to PVC’s to keep them flexible. Phthalates are known to lower IQ’s, cause birth defects, reproductive harm and hormone imbalances. Some hoses contain bromine and antimony, which can lead to kidney and liver damage.  BPA and lead are more unwelcome ingredients you may find in your garden hose.  Lead has been known to lower IQ’s. In addition to the plastic portion of the hose, there is the metal end. Metal ends of hoses do not have the same guidelines as faucets. Often outdoor faucets are brass and contain lead. When possible, nickel is a safer choice over brass.

Some hoses are labeled to be “drink safe” but bacteria can still be growing in the sitting water of that hose.

The sun and temperature also play a role. Much like you shouldn’t drink from plastic water bottles that are heated in the car, your hose will also leach more BPA when heated. Store your hose in the shade or in a shed when possible.

Last, don’t forget about your garden! If you are using that same hose to water your organic garden you may be spraying your fruits and veggies with BPA, lead and phthalates. If you don’t have a rubber or polyurethane hose you may want to think about replacing it. 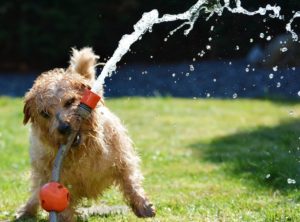 Last week we focused on Triclosan and where it is hiding. One of the biggest places is your toothpaste. While it is true that the FDA 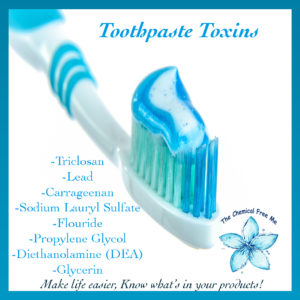 has stated triclosan has proven to fight gingivitis-is it worth the trade off? Triclosan has also shown to be an endocrine disruptor. This term gets mentioned a lot but isn’t always explained. Basically any endocrine disrupting chemicals can promote health issues such as breast cancer, testicular cancer, low term birth weight and the progression of cancers.  The animal studies that have included triclosan have shown it may interfere with cells that signal the brain and heart as well as having hormonal effects. Triclosan has also shown to cause resistance to antibiotics. One study showed that people who brushed their teeth with particular toothpaste high in triclosan had five times more triclosan in their urine.

Aside Triclosan, other toxins in toothpaste:

Sodium Lauryl Sulfate (SLS) or Sodium Lauryl Ether Sulfate – is what makes your toothpaste all foamy. I have to admit it took some getting used to when I switched to toothpaste that didn’t include that-however it is a psychological effect-the toothpaste still works without getting foamy J The problem with SLS? It is often contaminated with 1,4 dioxane which is a carcinogen. SLS is a registered insecticide and is toxic to the environments and marine life. SLS can also cause skin irritation and sores.

Fluoride –  is a touchy one. Fluoride is actually a neurotoxin and does accumulate in your tissues over time. Toothpaste that contains natural occurring cacao extract bromine has shown to be more beneficial in repairing and re-mineralizing teeth than fluoride according to more recent studies. Fluoride is imported from China (red flag? More on that next week!)

Propylene Glycol –  is as dangerous as it sounds. It is a mineral that is also used in paints, antifreeze and de-icers for airplanes. It has shown to cause organ toxicity, skin and eye irritations.

Diethanolamine (DEA) – Classified as a 10 (10 being the most toxic) with EWG’s ratings it is tied to stomach cancer as well as liver, bladder and esophagus cancers. California has declared it a possible human carcinogen. Seems like something we shouldn’t brush our teeth with?

Artificial Sweeteners and colors –  It gets complicated here. It’s easy to start with aspartame since we know it’s no good.  Saccharine is another one to avoid. Xylitol has mixed thoughts but so far is being considered more safe than not. Some artificial colors and sweeteners may be contaminated with heavy metals or made from petrochemicals. No thank you!

Carrageenan – This one annoys me beyond belief mostly because I find in many “natural” types of toothpaste that people think they have swapped safely for. It is a carcinogen and causes inflammation.

Glycerin –  While glycerin is not toxic by itself, but doesn’t rinse off the surface of your teeth and prevents the natural flow and protection of saliva.

Lead –  Apparently Earthpaste has tested for lead. (Unfortunate, since they have a great EWG score ingredient wise.) http://leadsafeamerica.org/earthpaste/  They have stated that it is natural occurring. Natural or not we know there is NO safe level of lead for consumption so it is best not to include it in your toothpaste. This is a controversial issue for toothpastes with bentonite clay in them. I invite you to research and decide for yourself.

What are some better choices?

Personally I have come to like Ugly by Nature (https://uglybynature.com). I have tried a few flavors but I am partial to the mints since my brain has programmed to feel clean with a minty toothpaste.  I have used it for over a year and I have no complaints from my dentist or myself. (As I side note I also do regular oil pulling-to read more check out our previous blog post on mouthwash!)  Check your brand at EWG and find yourself a safer swap! 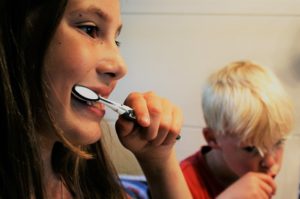 I learned this a number of years ago but was recently reminded when it was time to replace my shower liner again. You likely have at 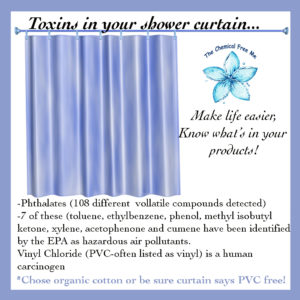 least one (possibly two if your outer curtain is also plastic and not fabric) toxic shower curtain.

What is making your shower curtain toxic?

The most common culprit is Vinyl Chloride. (PVC) which is a carcinogen. The chemicals involved are released further with a warm, moist environment. (Note: your shower?)

PVC in your shower curtain can produce phthalates, which are linked to ADHD, cancer, type 2 diabetes, and lower IQ, asthma and reproductive issues. Phthalates evaporate into the air as well and then cling to the dust in your home.

Lead: This is usually familiar to people since we have banned it in many things (pencils, paint etc) Unfortunately it is still out there and according to the Department of Environmental Safety it has also been linked to kidney damage, learning disabilities, damage of the nervous system and anemia.

Petroleum: we have covered the dangers of petroleum in the past few weeks. It has also found its way into EVA and PEVA liners. In exchange for being chloride free they have subbed in petroleum to obtain pliability.

Yes! This one is an easy fix! There are safer and sustainable shower curtain materials. I went with organic cotton. Nylon is another quick drying choice.  Water resistant Polyester can be found as another solution to this problem. Slightly more expensive you can also find Hemp Shower curtains. Making a habit of closing the curtain after you shower allows it to dry out helping prevent mildew on any curtain. 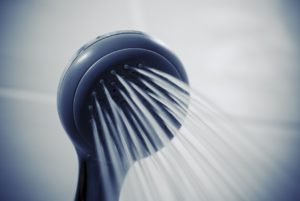 These necklaces can be found year round in goody bags, and at events. They are colorful, sparkly and have a huge appeal for children.

It’s possible you may have acquired some on New Years Eve and brought them home to your child as a nice surprise.

Several years ago you could have found many strands lying around my house for my then toddler daughter to enjoy. After learning how toxic they are they all disappeared.

Mardi Gras beads have tested for high concentrations of lead and other heavy metals.  Lead has been linked to brain damage, stunted development and a shortened attention span.  There are no safe levels of lead for children to be exposed to.

Some beads, upon being broken open actually contain pieces of old circuit boards and electronics. In addition to lead, 80% of beads tested contained arsenic, cadmium or flame retardant chemicals.

Beyond your own personal exposure these beads are very damaging to the environment. It has been estimated that 900,000 pounds of flame-retardants and 10,000 pounds of lead help make up the yearly inventory of Mardi gras beads. The toxins seep into the water supply and the soil working their way into the food chain and back to us.

What can you do to keep these toxins out of your home?

Ideally don’t bother with the beads. If you are somewhere and the beads are being thrown around and passed out and you chose to let your child (or yourself participate) take some precautions:

-Opt for clear plastic ones when possible (these tested safe)

-Wash your hands with soap and water or at least a baby wipe after handling and before eating.

-Do not let children put the beads in their mouths.

-Never burn the beads or store them in sunlight.

-If you are in a position that you must handle the beads on a regular basis wear gloves. 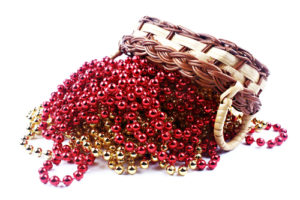 If you’re like me you only think about the Christmas decorations twice a year-once to take them out and a second time to put them away.  While they are hidden away in the attic I am confident those strings of 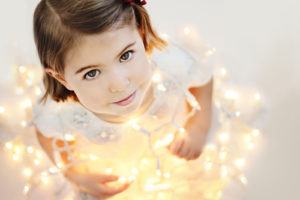 lights multiply.  That means it is rare I need to buy more strings of lights.  In the past I only ever considered replacing if they started to seem dated and would be a fire hazard. This year I wondered about the other dangers.

Most lights have a PVC (polyvinyl chloride) stabilized by lead to prevent cracking. Unfortunately there is no safe level of lead.  Lead is a neurotoxin that causes damage to the brain and nervous system. Lead accumulates in the body over time with each exposure. It does come off of the light strands on your hands as you touch the light strands and not many people think about washing their hands after touching the lights before they grab and eat a Christmas cookie.

How can you limit your exposure?

First-never let children handle the lights. Wear gloves if possible when stringing the lights and always wash your hands.  Don’t wrap your child or pet in light strings for a cute photo. After you undecorated your tree this year, toss your old lights and replace them with RoHS compliant lights for next season. The bonus? It saves you trying to put away the old ones without tangling them up! 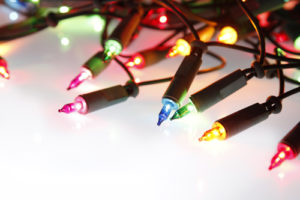