Finishing up with our oral health series is a closer look at dental floss. We know flossing has benefits. Flossing has been shown to 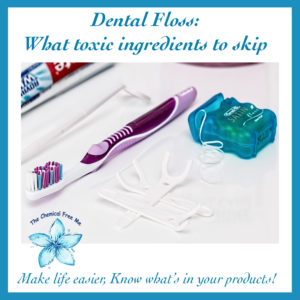 extend your life by improving gum health, warding off gum disease, heart disease and dementia. Are there drawbacks to what type of floss you are choosing? Unfortunately, yes, but there is always a natural solution.

Some dental floss is made of nylon, which is synthetic and made from petroleum products. Nylon can take up to 50 years to break down. While floss may be “small” consider that American alone are buying 3 million miles of floss each year. Floss picks use less floss, but more plastic handles.

Another often found choice-synthetic wax. The synthetic wax is then coated with petroleum.

Many companies have coated their floss with Teflon  (perfluorotanoic acid -PFOA or PFC’s ) to make them slide easier. Unfortunately PFOA has been connected to thyroid disease, cancer, birth defects and weaker immune systems. Check your labels for ingredients that may contain the word “fluoro” pr “perfluoro”  I know you may be thinking “How much of this chemical can I possibly ingest? Is it a big deal?” Keep in mind that these chemicals have proven not to leave our bodies and build up over time. You want to cut down anywhere you can. Purchasing natural floss easily does this. You can find floss with a natural wax coating. Some options include Toms of Maine, Dessert Essence and Radius (although you should be aware that Radius is a silk floss and is not vegan friendly) 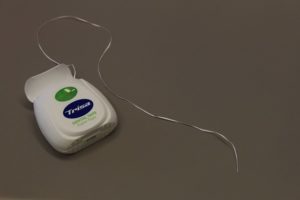 Are you saving time or adding to your toxic load?

Last week we covered wrinkle remover. In case you have solved your wrinkle problems with wrinkle free clothing there are a few things to be aware of.

I have to be honest when I first heard about wrinkle free shirts it seemed brilliant! Why aren’t they all wrinkle free? Sometimes if it’s 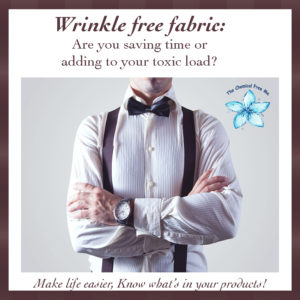 too good to be true it usually is.

What actually makes fabric wrinkle free when it’s still made out of the same cotton? The fabric is treated with PFC’s (including Teflon), sulphuric acid and a resin that releases formaldehyde.

According to the National Cancer Institute Formaldehyde is a known human carcinogen. (Link: https://www.cancer.gov/about-cancer/causes-prevention/risk/substances/formaldehyde/formaldehyde-fact-sheet)

According to clothing companies the levels are considered safe (although I am not sure I would call any level of these safe nor do we have long term studies to back that up). However, when tested levels exceeded what is considered to be “safe” for skin contact. (link: http://www.gao.gov/new.items/d10875.pdf)

Sometimes in a world of “convenience” we forget what’s safe. We also assume that if a product is sold to us that it must be safe. One could also argue these toxins are everywhere. Unfortunately this is true. They build up in your body and accumulate over time. Each toxin that you can eliminate exposure to is valuable to your long-term health.

My opinion? Skip the wrinkle free shirts, sheets etc. Pretend they never existed and grab your iron if needed. 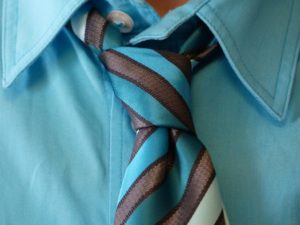 Growing up we always had stainless steel pans. At some point we replaced all those pans for non-stick sauté pans. The goal was that they were easier and faster to clean. We live in the era of convenience right? After a few too many years of “convenience” I replaced all those non-stick pans with the original stainless steel and a few cast iron pans. Why go backwards? Sometimes “forwards” isn’t really progress (Note: GMO 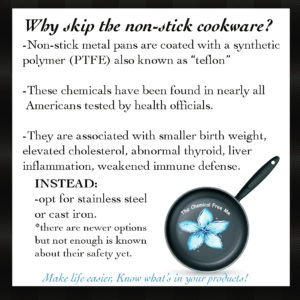 food, plastic and antibacterial everything)

Back to the pans…. what is wrong with those easy to clean non-stick pans? Generally, non-stick pans are aluminum coated with a synthetic. Previously they were coated with perfluorooctanoic acid (PFOA). EWG studies, conducted by DuPont’s own scientists, revealed that when its non-stick cookware is heated it breaks down into 15 types of toxic gases and particles. In 2004 a  $343 million dollar lawsuit was won for contamination of drinking water and an association of tumors and developmental problems in animals. The EPA was advised to declare PFOA as a carcinogen. Eight companies agreed to phase out PFOA by 2015. (Take note: how old are your pans?)

Non-stick pans may also include polytetrafluoroetheylene (PTFE) also known as Teflon. High temperatures have caused toxic fumes (including six toxic gases, which include two carcinogens.  Fumes from these pans to kill pet birds and cause people to develop flu like symptoms.  Unfortunately the coating also breaks down and the toxic particles are carcinogenic.

PFC’s contaminate the environment and find their way into your blood stream. Residue from these substances has been found in blood, breast milk, liver and even umbilical cords.  High levels have been associated with peripheral artery disease, high “bad” cholesterol, insulin resistance, and thyroid disease.

“Safety suggestions” include using lower temperatures and making sure not to damage the coating. Lower temperatures tested were all exceeded by the average cooking temperature. It would totally eliminate preheating pans, broiling, and searing meat.  In addition, ventilating your kitchen and keeping birds out of the kitchen. The best safety suggestion is likely replacing any non-stick cookware you may have.

Logical solutions: replace one pan at a time.  Good pans are not cheap. (Neither is long-term illness.) Start with your most common used pan (likely a stovetop pan that you scrape with a spatula and cook at higher than safe temperatures. Work your way through until you have a safer set of pans. Stainless steel, cast iron or glass for bake ware.

As with most things it is impossible to avoid all PFC’s (more next week on where else they are hiding) so cutting down on the ones you can control is a difference maker. 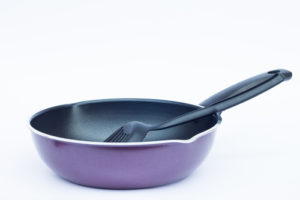